This event has passed.

Thirty-three drivers. 200 laps. 500 miles. One bottle of cold milk. The only thing missing from this magical Indianapolis 500 mix is you.

The Indy 500 is the premier event of the IndyCar Series and is held annually at Indianapolis Motor Speedway in Speedway, Indiana, a suburb of Indianapolis. The mace showcases the top-level of American Championship car racing. It is billed as the “greatest spectacle in racing” and is the largest single day sporting event in the world, with a track capacity of around 400,000. This historic event is considered part of the Triple Crown of Motorsport, one of the three most prestigious motorsport events in the world. The inaugural race was held in 1911 and was won by Ray Harroun.

For more than a century, the Indianapolis Motor Speedway has been home to some the greatest stories in sports. Each year, millions of race fans around the world witness odds-defying accomplishments that turn time into history and drivers into legends, setting in stone legacies that will live forever. This immersive web series chronicles the greatest moments, traditions and heroes of the Racing Capital of the World, Where Tradition Never Stops.

Don’t miss out on another incredible edition of “The Greatest Spectacle in Racing.”

RoadStallion enhances every part of your transportation experience and sets the tone for your event, so that travel becomes a pleasure.  You can focus on enjoying time with your group. RoadStallion will take care of the rest. 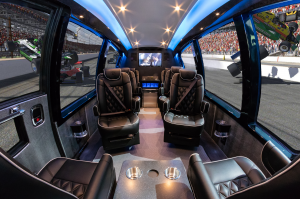